The Delta-2 Property, Quebec, Canada and the R-14 Gold Prospect

The Delta-2 property is located roughly 35 kilometres south east of the town of Chibougamau (Figure 1: location map). Claims are located within the La Dauversière, Queylus, Dollier, Charron and Lemoine Townships.

There are two types of targets for mineralization at Delta-2

1) Gold Targets are believed to be associated with syn-plutonic structures with or without felsic dikes.  The objective is to locate these structures through high-resolution magnetic surveys and field-proof this hypothesis.  The size of the alteration halo defined by Faure (2012) and the long-lived nature of the structures, suggest an important system with great size potential. 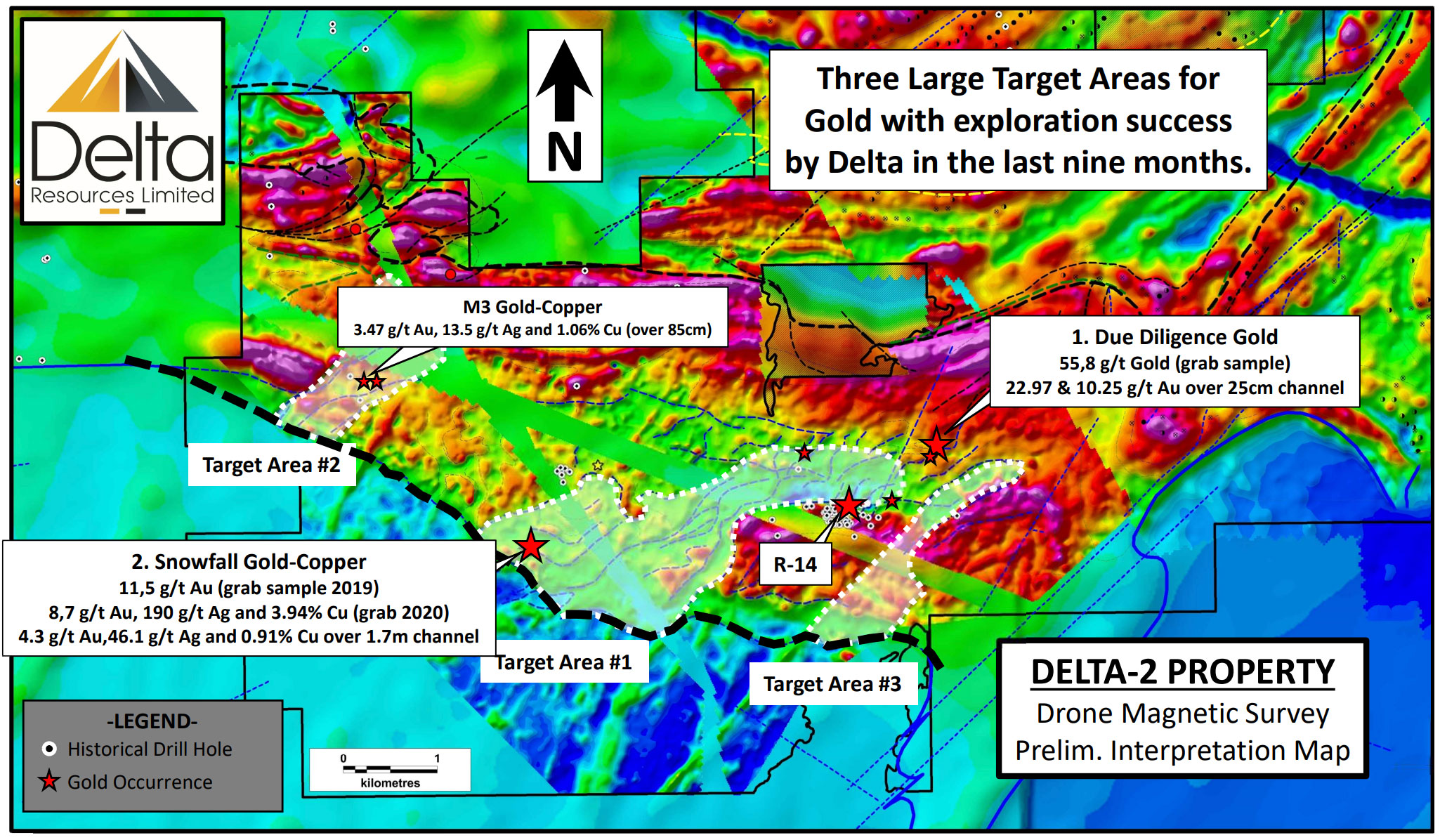 Based on the high-resolution magnetic map and Delta’s model of collapse structures, three major targets for gold mineralization emerge that coincide with what is believed to be syn-plutonic structures. The target areas are already characterized by associated gold occurrences such as the R-14 gold prospect AND LED TO THE DISCOVERY OF THE DUE DILIGENCE AND SNOWFALL OCCURRENCES.

2) Gold-Rich Volcanogenic Massive Sulphide Targets are believed to be associated with the contact between Volcanic Cycle II and III.  In the immediate area of the Delta-2 property, the past producing Lemoine Mine is an example, located approximately 2 kilometres to the north of the Delta-2 property boundary.  Respectively 1.5 kilometres and 2 kilometres east of the Delta-2 property boundary, are the Guillaume-Cartier and Delinel Gold prospects; two additional gold-rich occurrences showing volcanogenic massive sulphide affinity.  Both prospects consist of gold-bearing, concordant lenses of disseminated to semi-massive pyrite-pyrrhotite with minor amounts of chalcopyrite and sphalerite. 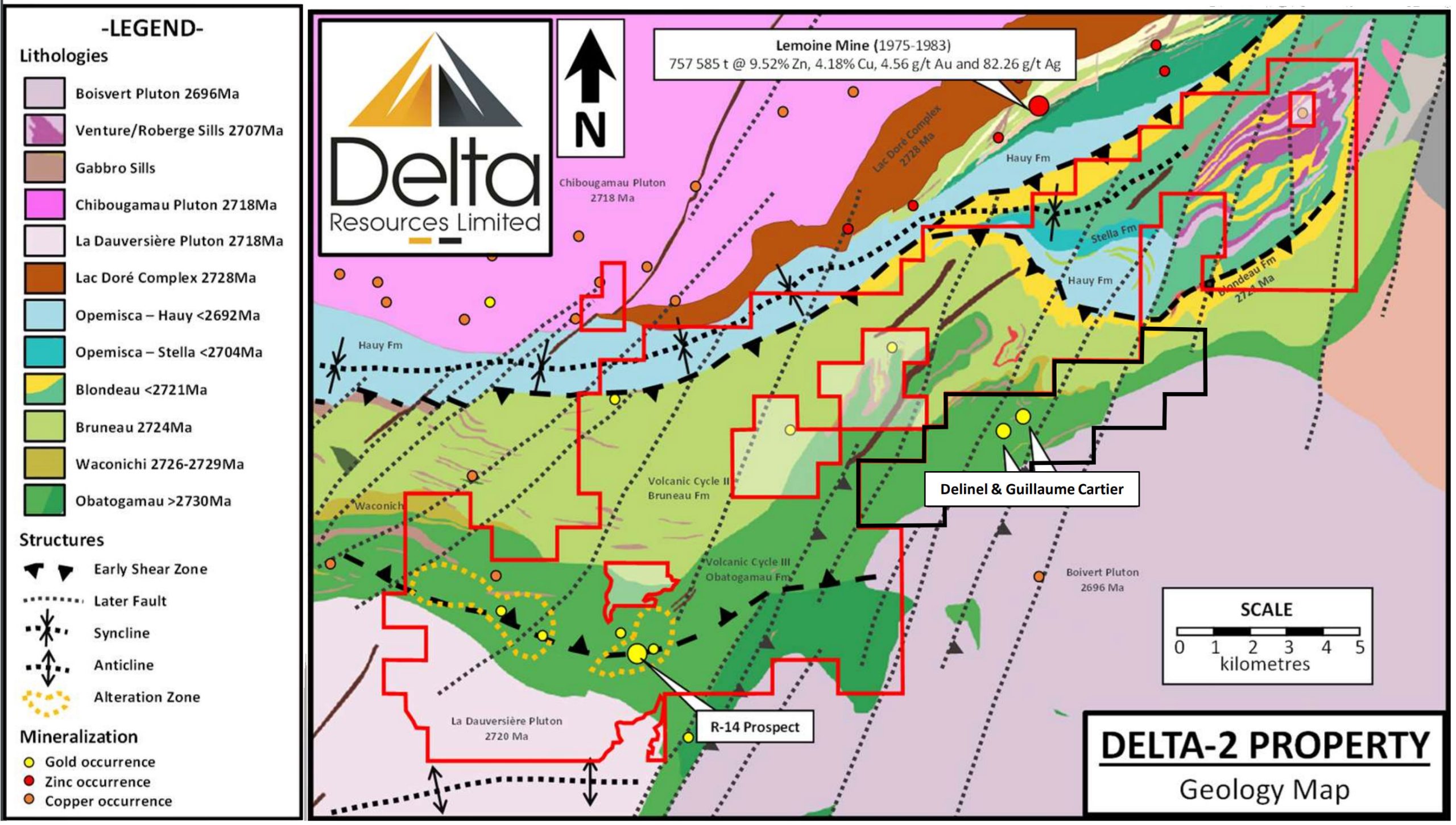 First derivative magnetic map of the Delta-2 property in Chibougamau, Quebec, showing the site of Delta’s new, high-grade gold discovery. Note the new discovery is situated in a never tested NE-trending corridor of structural complexity believed to represent an early structure that may have localized gold mineralization of magmatic hydrothermal affinity.

Note that R-14 and OLI are 1km apart and not a single drill hole tested their extension. 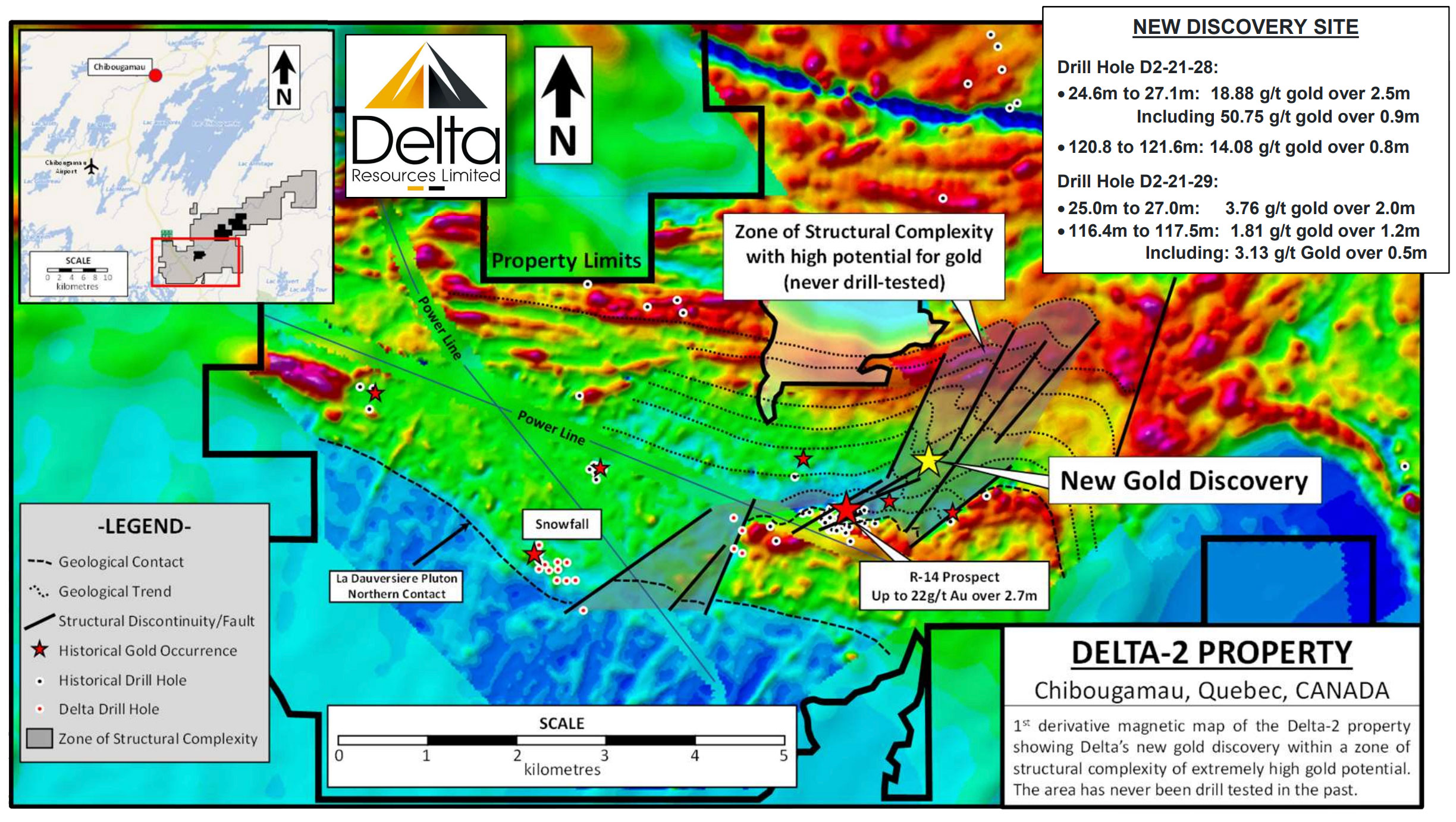 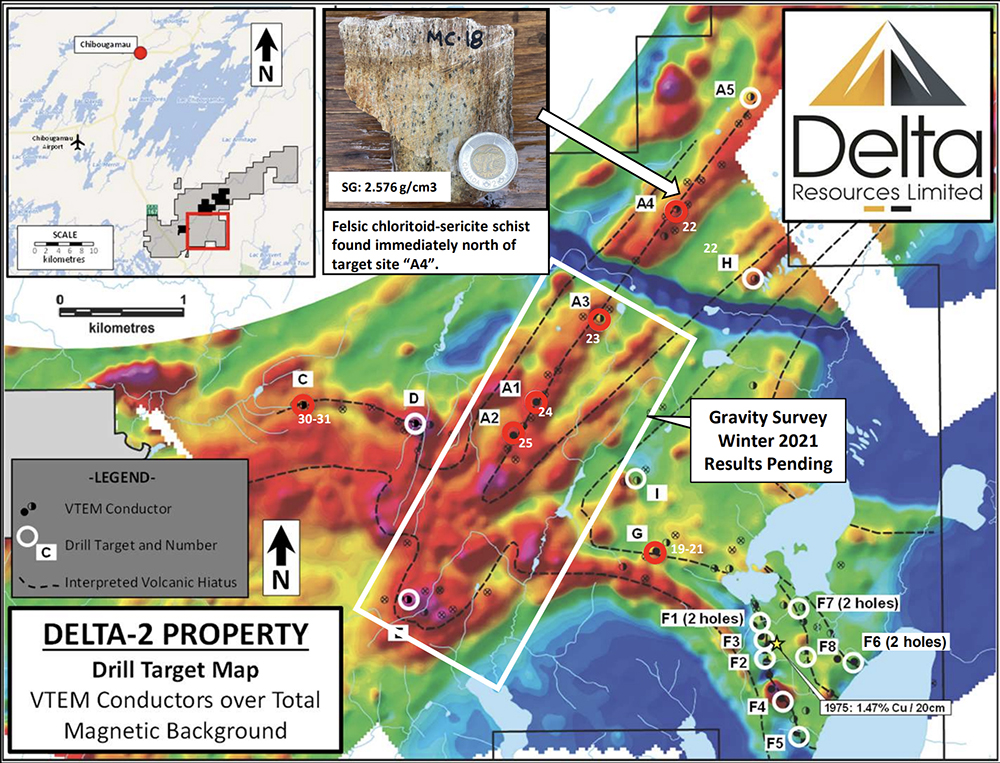 The greenstone part of the Caopatina-Desmaraisville segment is delimited by the Kapunapotagen Fault to the north, the Guercheville Fault to the south, the Grenville Front to the east and the Lapparent massif to the west.

In the Chibougamau district, three (3) volcanic cycles are identified.  All three volcanic cycles consist generally of mafic volcanics (massive to pillowed) of tholeiitic affinity at their base, overlain by intermediate to felsic volcanics of transitional to calc-alkaline affinity.  The stratigraphic sequence with estimated thicknesses and age of rocks is shown at Figures 2 and the distribution of these rocks at the property-scale is shown at figure 3. 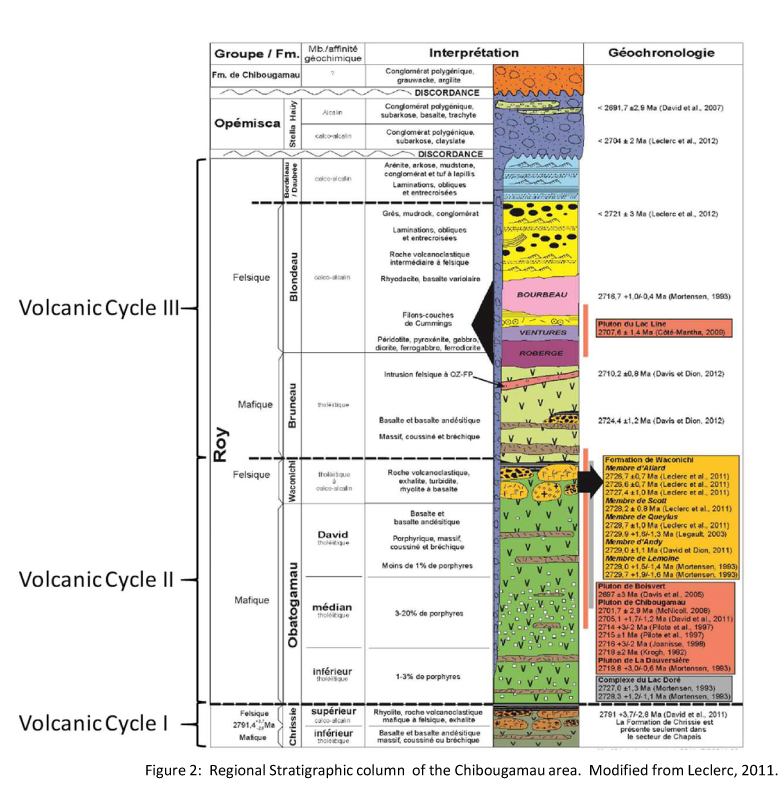 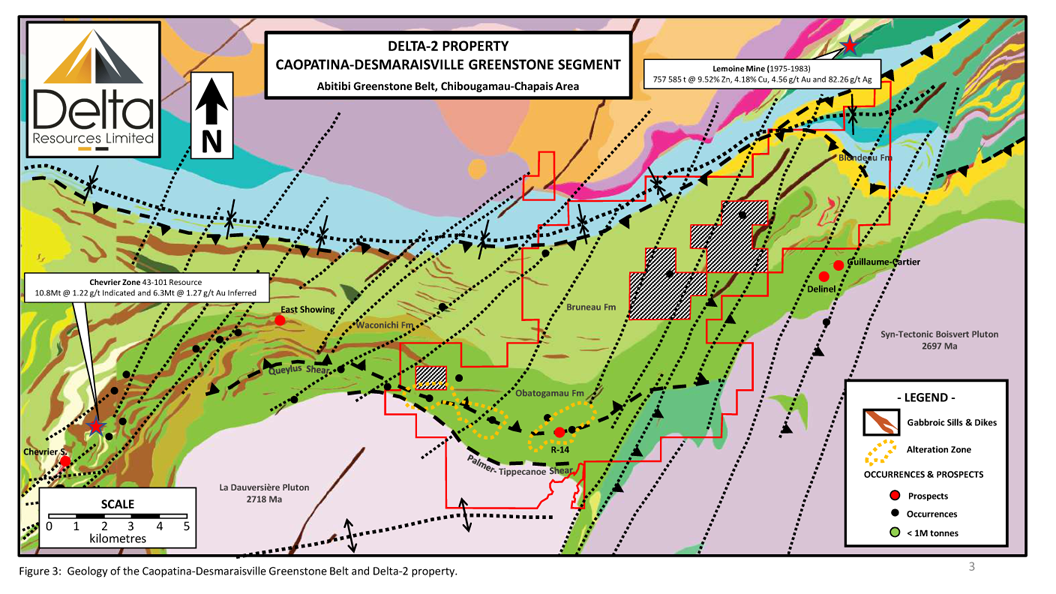 OVERLYING SEDIMENTS (2704-<2692 Ma):  Unconformably lying at the top of the volcanic sequence are the Hauy and Stella Formations which consist of clastic sedimentary units ranging from mudstones to polymictic conglomerates.  These sedimentary rocks are typically spacially associated with regional deformation zones along which sedimentary basins formed during dip-slip movements (i.e. they are often referred to as syn-tectonic).

Intrusive rocks crosscut the entire stratigraphic sequence.  Four major intrusive events are recognized and are as follows (from oldest to youngest):

Syn-volcanic intrusions associated with Volcanic Cycle II such as the Lac Dore Complex (2728 Ma), a layered anorthosite and gabbroic intrusion.

Syn-volcanic sills of ultramafic to gabbroic composition associated with Volcanic Cycle III such as the Bourbeau, Venture and Roberge sills (2716 Ma), and

Syn-tectonic of tonalitic to granodioritic intrusions synchronous to the Hauy and Stella sediments such as the Boivert Pluton (2697 Ma).

Metamorphic grade in the area is generally of greenschist facies but increases to amphibolite facies near certain syn-tectonic intrusions and even reaches granulite facies along the Grenville Front to the east.

Phase 1) The earliest evidence of deformation in the area consists of folds with axial traces trending NNW-SSE to NS.  The relative age of this folding is unclear, but it appears to be pre-to syn-tectonic. It should also be noted that, except for the Henderson-Portage structure (045°/60°SE) most of the deposits in the Chibougamau Mining district are located on NW-SE-trending structures (Figure 4). 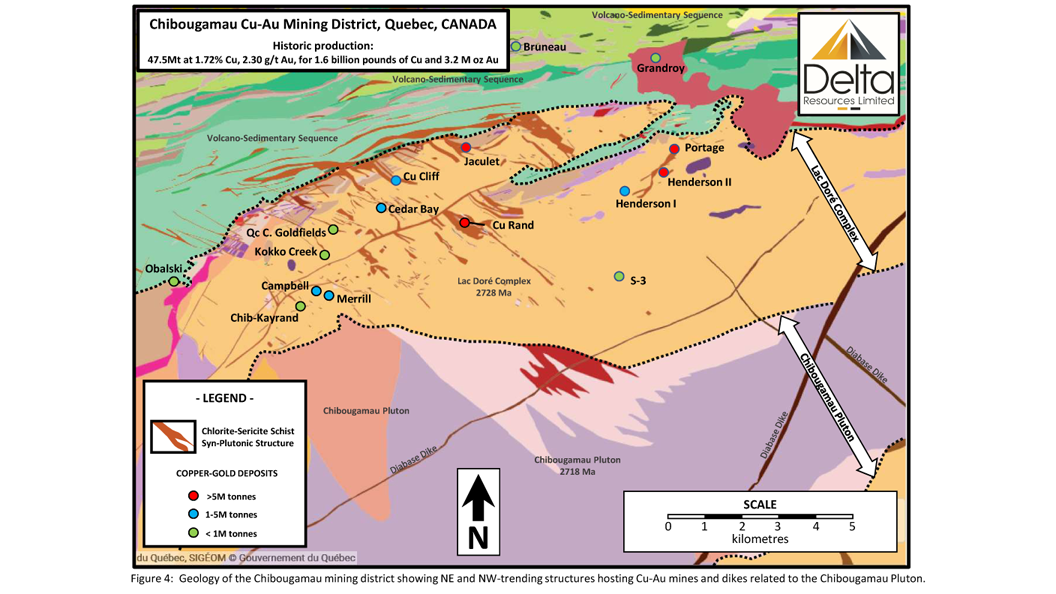 Phase 3) Is characterized by a reactivation of the Phase 2b structures with a dextral sense of motion.

Phase 4) This last phase of deformation is characterized by NNE-SSW-trending faults with associated foliation but showing more brittle attributes. These structures are believed to have formed as a result of the Proterozoic collision of the Grenville Province and are more abundant in the eastern part of the region, at the Grenville Front.  This phase of deformation would also have reactivated the Phase 2b structures with a dextral sense of motion.

The Delta-2 property covers the north-eastern contact of the syn-volcanic La Dauversière pluton (2720 Ma).  The La Dauversière pluton has a tonalitic composition and is thought to be responsible for many gold occurrences in the area such as the Chevrier Zone (43-101 Resource of 10.8Mt @ 1.22 g/t Indicated and 6.3Mt @ 1.27 g/t Au Inferred) and the R-14 Gold Prospect which is situated on the Delta-2 Property.

Immediately north of the La Dauversière Pluton, in the southern half of the property, rocks consist of massive to pillowed basalts of the Obatogamau Formation (Volcanic Cycle II). The basalts are intercalated with thin horizons of intermediate to felsic volcanics and presumably, are overlain by felsic volcanic rocks of the Waconichi Formation.

In the Chibougamau area, the contact between Volcanic Cycles II and III is very prospective for Volcanogenic Massive Sulphide mineralization.  In fact, the past producing Lemoine Mine (1975-1983: 757 585 tonnes @ 9.52% Zn, 4.18% Cu, 4.56 g/t Au and 82.26 g/t Ag), a small but very high grade, is located approximately two kilometres north of the property boundary, at that contact (Figure 3).  A strike length of over 15-20 kilometres of this prospective contact is located on the Delta-2 property.

Stratigraphy is generally EW-trending and turns NE-SW in the eastern part of the property, generally wrapping around the more competent rocks of the La Dauversière and Boisvert plutons.

Extrusive rocks of the property are intruded by a number of small syn-volcanic mafic sills and dikes and felsic dikes that are genetically linked to the La Dauversière Pluton (Faure, 2012) and spatially associated with the R-14 gold prospect.

The deformation and metamorphic history at the property-scale is the same as described at the regional-scale.

Phase 2 Deformation is characterized by a strong EW-trending, steeply dipping foliation which turns NE-SW in the eastern part of the property.   Two structures of this generation, described as “deformation corridors” are documented on the property (Faure, 2012): the Queylus corridor to the north and the Palmer-Tippecanoe corridor to the south, at the contact with the La Dauversière pluton.  The R-14 Gold Prospect is spatially associated with the Queylus deformation corridor (Figure 3).

Metamorphism at the property is generally greenschist facies but reaches the upper-amphibolite facies in the eastern part of the property.

The most important gold prospect at the Delta-2 Property consists of the R-14 Gold Prospect which is spatially associated with the Queylus deformation zone and with a felsic dike swarm associated with the La Dauversière Pluton.  At R-14, exceptional gold values of up to 142.29 g/t Au over core length of 2.44 metres have been intersected in the early 1980’s by Corner Bay Exploration (Brunelle, 1983 quoted by Faure, 2012).  The property was later worked by D’Arianne Resources who also reported significant results in channel and drill samples. 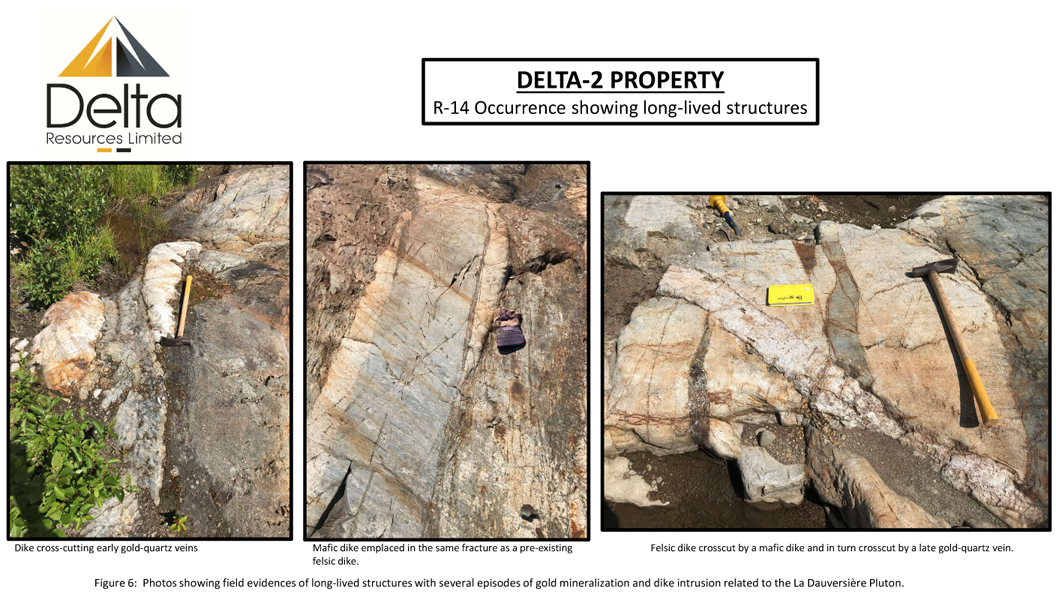