Drilling was completed at the Delta-2 VMS property in late May of 2022. A total of thirty (30) drill holes were completed for a total of 6,551 metres. The drilling program tested three (3) gravity anomalies and twenty-seven (27) high-priority VTEM conductors. The objective of the program was to search for a Lemoine-Type VMS deposit (Lemoine Past Producer 0.76MT @ 4.2% Cu, 9.6% Zn, 4.5 g/t Au). Drilling focussed in two major areas, shown in Figure 1. 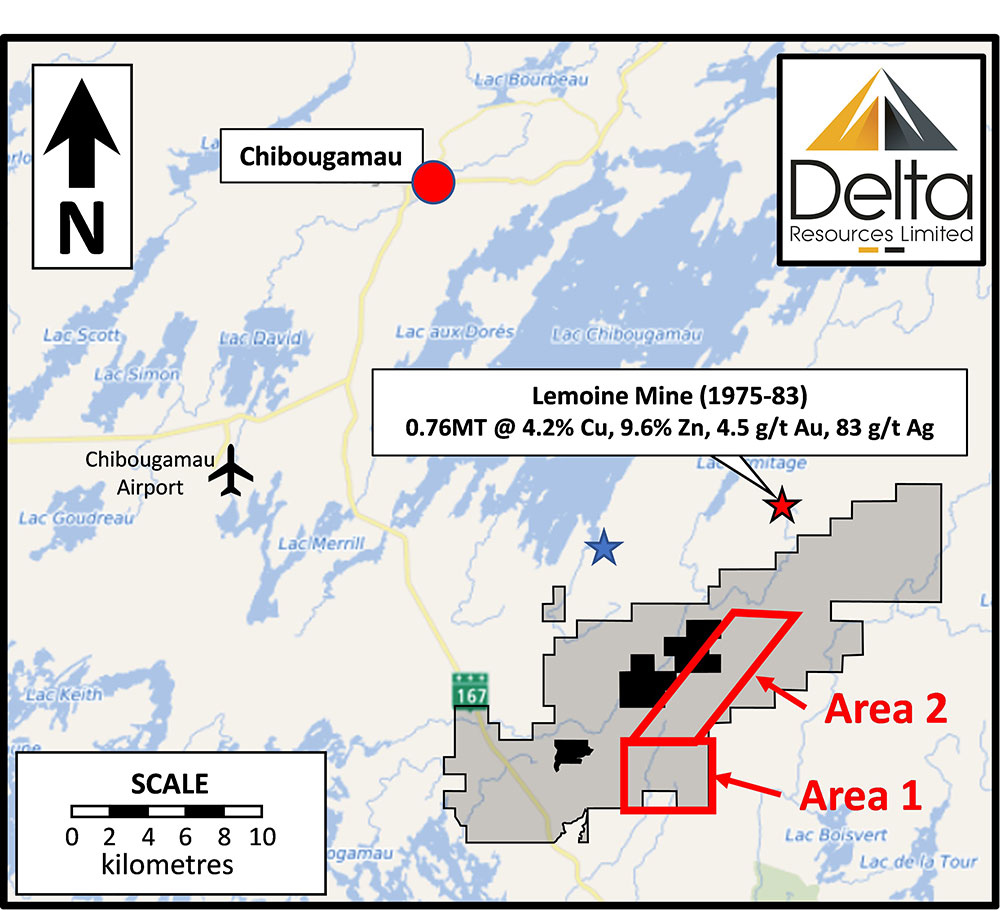 Every drill hole of the program intersected sulphide mineralization with minor amounts of graphite in the north-eastern portion of Area 2. Delta geologists gained essential knowledge of the area and have refined their interpretation of the mineralized horizon.

“These are very encouraging results at Delta-2 VMS. These sulphide horizons with enriched precious and base metals suggest the right mineralizing processes were active for the deposition of VMS deposits. We also interpret these metal-enriched areas as indicative of possible proximal VMS mineralization. Delta will now focus on these areas while continuing to explore the property at large where many more VTEM conductors still need to be tested,” stated André Tessier, President and CEO of Delta Resources.

In the course of this drill campaign, Delta encountered the sulphide horizon with four (4) areas/sections of interest: 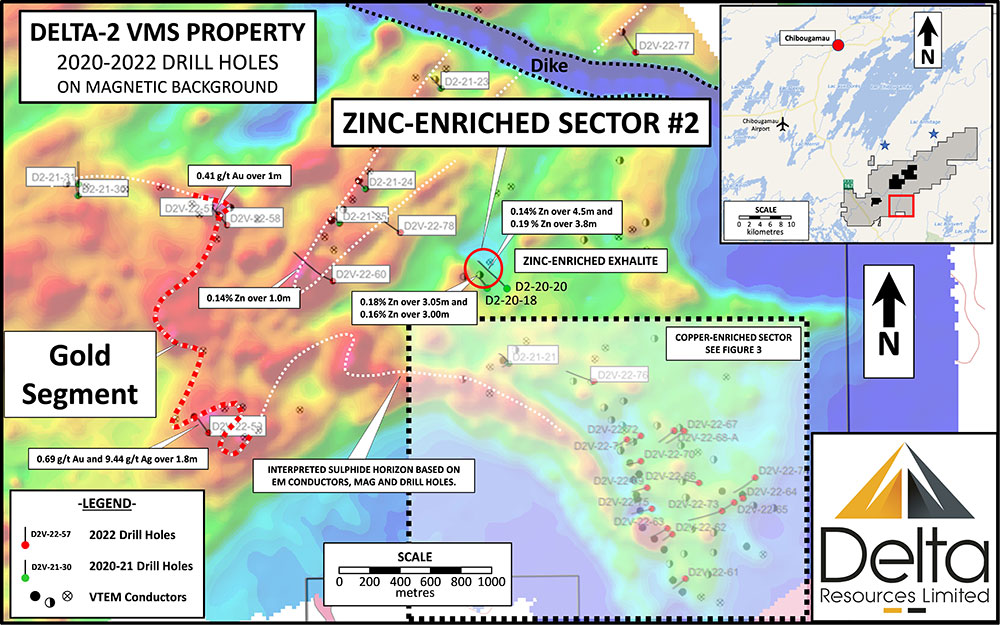 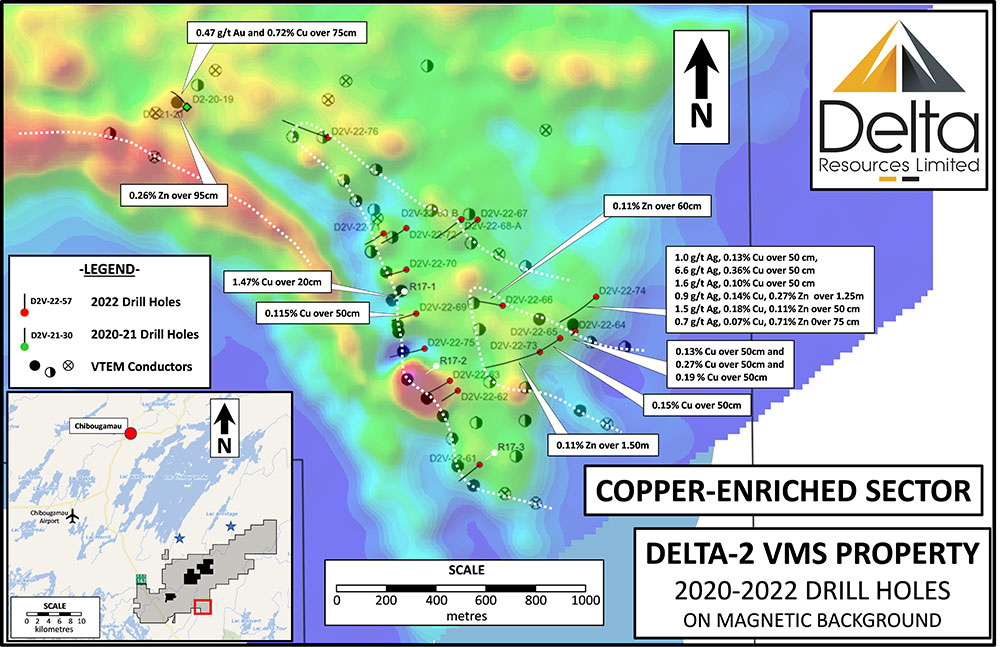 The drill holes intersected intensely altered mafic volcanics (see photo), rhyolites and rhyolitic volcaniclastites (garnet-sericite-chlorite). Sulphide conductors are typically associated with the felsic volcaniclastites and consist dominantly of pyrrhotite and pyrite with accessory chalcopyrite and sphalerite. Sulphide contents within the conductive zones vary from 5% to 100% and sulphide intercepts vary in thickness from 25cm to 15m.

Photo showing the garnet-sericite-chlorite alteration from drill hole D2V-22-57 at 95m. Garnets reach up to 3cm in diameter.

CURRENT WORK AT THE DELTA-2 VMS:

Chemical analyses reported in this press release were performed at ALS Chemex Laboratories in Val D’Or, Quebec. The gold assays were carried-out by atomic absorption method while other elements were assayed by ICP-MS aqua regia digestion method. Sampling and analytical procedures are subject to a comprehensive Quality Assurance and Quality Control program that includes duplicate samples, blanks and analytical standards.

Core logging and sampling was completed by Delta personnel and Laurentia Exploration Geologists. NQ-size drill core was sawed in half lengthwise and half of the core was sampled and sealed in clean plastic bags before being shipped for assay. The remaining half of the core was replaced in core boxes and is stored at Delta’s core storage facilities in Chibougamau, Quebec. Standards and blanks are inserted in the sequence of samples on site as quality assurance and quality control in addition to the regular insertion of blank, duplicate, and standard samples accredited by ALS Chemex Laboratories during the analytical process.

Andre C. Tessier, P.Eng and P.Geo. President and CEO of Delta Resources Limited is a Qualified Persons as defined by NI-43-101 and is responsible for the technical information presented in this press release. Mr. Tessier has reviewed the drill core and the analytical results described herein.

Delta has 49M shares outstanding, is currently funded for its 2022 exploration and in addition, is set to receive $400,000 in March, 2022, through the sale of its Bellechasse-Timmins gold project in SE Quebec.

ON BEHALF OF THE BOARD OF DELTA RESOURCES LIMITED.

Some statements contained in this news release are “forward-looking information” within the meaning of Canadian securities laws. Generally, forward-looking information can be identified by the use of forward-looking terminology such as “plans”, “expects”, “is expected”, “budget”, “scheduled”, “estimates”, “forecasts”, “intends”, “anticipates”, “believes” or variations of such words and phrases (including negative or grammatical variations) or statements that certain actions, events or results “may”, “could”, “would”, “might” or “will be taken”, “occur” or “be achieved” or the negative connotation thereof. Investors are cautioned that forward-looking information is inherently uncertain and involves risks, assumptions and uncertainties that could cause actual facts to differ materially. There can be no assurance that future developments affecting the Company will be those anticipated by management. The forward-looking information contained in this press release constitutes management’s current estimates, as of the date of this press release, with respect to the matters covered thereby. We expect that these estimates will change as new information is received. While we may elect to update these estimates at any time, we do not undertake to update any estimate at any particular time or in response to any particular event.

By providing your e-mail address, you are consenting to receive press releases, quarterly and annual reports, presentations and other information concerning Delta Resources Limted. You may withdraw your consent at any time.