October 19, 2022 / Kingston, ON / Accesswire.  Delta Resources Limited (“Delta” or “the Company”) (TSX-V:DLTA) (OTCBB:DTARF) (FRANKFURT:6G01) is pleased to provide results from its 2022 drilling program at the Eureka Gold Deposit, 50 kilometres west of Thunder Bay, Ontario.  A total of 2,719 metres were completed in nine drill holes during this program.

All nine drill holes of the 2022 program intersected the gold-bearing zone with the easternmost drill hole of the program returning assays of:

The mineralized zone has now been intercepted over a strike length of 850 m with the best grades increasing towards the east. 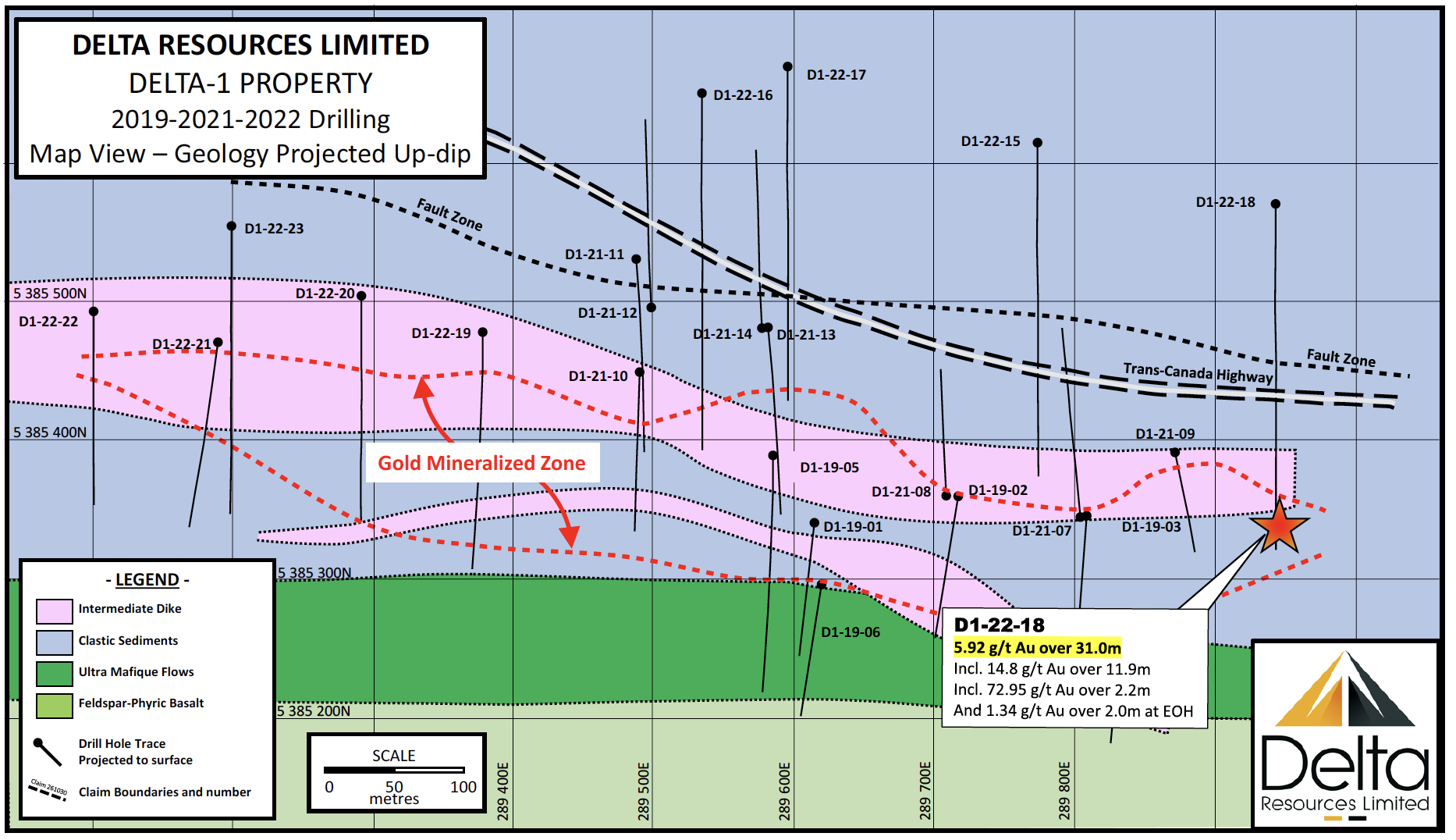 Figure 1: Plan view map showing locations of the drill holes. (Note: The geology has been projected up-dip to the surface) 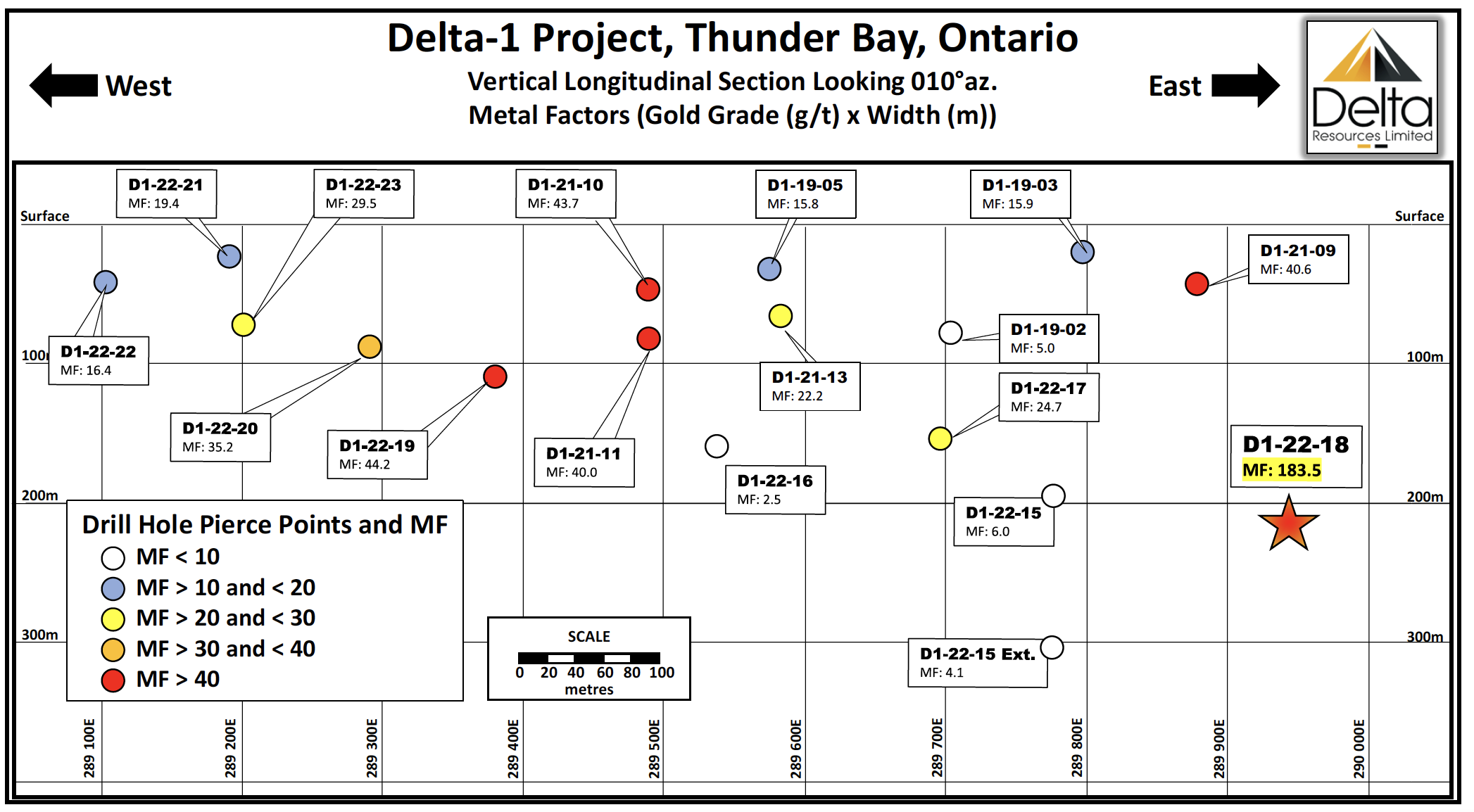 André Tessier, President and CEO commented: “These first high-grade results at Delta-1 are very encouraging and could indicate a significant and higher-grade area at Eureka.  In addition to seeing very wide intercepts of low-grade gold, we are now seeing the potential for high-grade zones, particularly towards the east where the zone has never been tested.  Based on the visual identification of significant native gold alone, Delta mobilized a drill to complete two additional holes in the eastern extension of the zone and the team is eagerly awaiting the results from these holes.”

The mineralized zone trends roughly 100° azimuth, dips 50° towards the north, and has now been intersected over a strike length of approximately 850 m and a vertical depth exceeding 200 m.

The Delta-1 project is located in the Shebandowan Greenstone Belt and covers a 17 km strike extent of the Shebandowan Structural Zone which also hosts the low-grade – high-tonnage Moss Lake gold deposit (Goldshore Resources GSHR:TSX.V), 50 km to the west. 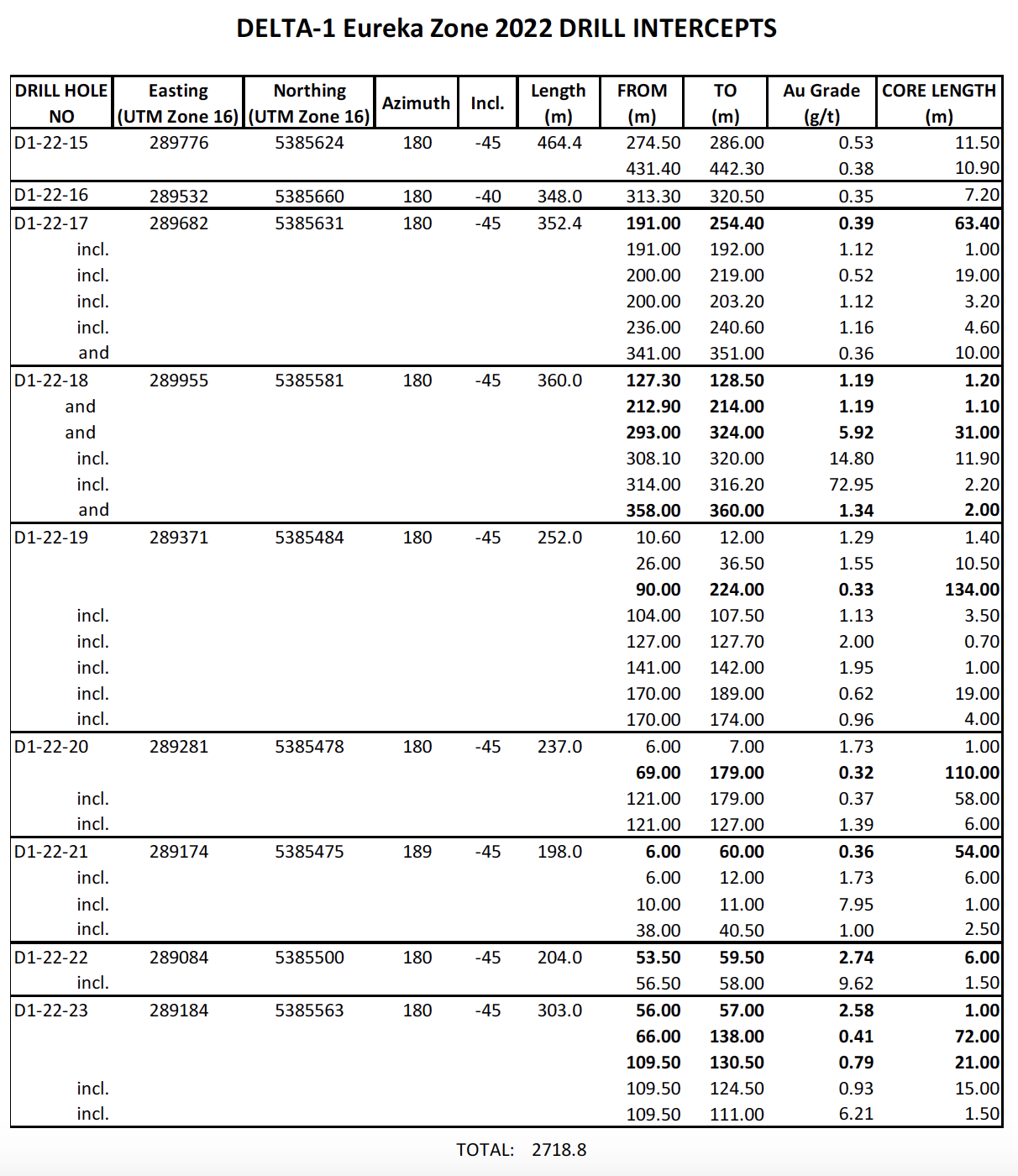 The results presented herein clearly warrant an aggressive follow-up drilling program, the extent of which will be determined shortly.  Meanwhile, based on the visual examination of drill hole D1-21-18 alone, and as previously announced on September 27, 2022, a drill was mobilized to complete two additional drill holes. A crew was also mobilized to the property for a mechanical trenching program to better expose the mineralized zone at surface.

The following assaying protocol was adopted at Delta-1 in an attempt to reduce the assay variability due to nugget effect caused by visible gold:

Core logging and sampling was completed by Delta and Bayside Geoscience personnel in Thunder Bay, Ontario. NQ-size drill core was sawed in half lengthwise and half of the core was sampled and sealed in clean plastic bags before being shipped for assay.  The remaining half of the core was replaced in core boxes and is stored at Delta’s core storage facilities in Chibougamau, Quebec.  Standards and blanks are inserted in the sequence of samples on site as quality assurance and quality control in addition to the regular insertion of blank, duplicate, and standard samples accredited by SGS Canada Minerals Laboratories during the analytical process.

Daniel Boudreau, P.Geo. Manager of Exploration of Delta Resources Limited is a Qualified Person as defined by NI-43-101 was supervisor for the drilling program and has reviewed the technical information presented in this press release.

Delta Resources would like to acknowledge the financial support provided by the Ontario Government via the Ontario Junior Exploration Program (“OJEP”).  Delta will be receiving up to $200,000 upon completion of its exploration program at Delta-1.

ON BEHALF OF THE BOARD OF DELTA RESOURCES LIMITED.

Some statements contained in this news release are “forward-looking information” within the meaning of Canadian securities laws. Generally, forward-looking information can be identified by the use of forward-looking terminology such as “plans”, “expects”, “is expected”, “budget”, “scheduled”, “estimates”, “forecasts”, “intends”, “anticipates”, “believes” or variations of such words and phrases (including negative or grammatical variations) or statements that certain actions, events or results “may”, “could”, “would”, “might” or “will be taken”, “occur” or “be achieved” or the negative connotation thereof. Investors are cautioned that forward-looking information is inherently uncertain and involves risks, assumptions and uncertainties that could cause actual facts to differ materially. There can be no assurance that future developments affecting the Company will be those anticipated by management. The forward-looking information contained in this press release constitutes management’s current estimates, as of the date of this press release, with respect to the matters covered thereby. We expect that these estimates will change as new information is received. While we may elect to update these estimates at any time, we do not undertake to update any estimate at any particular time or in response to any particular event.

By providing your e-mail address, you are consenting to receive press releases, quarterly and annual reports, presentations and other information concerning Delta Resources Limted. You may withdraw your consent at any time.